In an early twentieth century building at No. 2, Via Noe in Milan, between the dairy shop, the grocer and the hairdresser, is where Lina Cerea opened her Atelier for tailor-made shirts. Here, in this small space with its cast-iron windows and white blinds in the entryway, is where the tiny but spirited ANDREINA RIGAMONTI worked as a machine operator in the 1940s. Strengthened in her resolve by all the experience she gained there, in 1963 Andreina decided to take over the business, naming it Camiceria Rigamonti.

Andreina extended her premises when the hairdresser closed and, in the 1980s, completely renovated both shops. The light wood, the oval counter, the colours and scents of the many fabrics welcome you into an environment of calm and respect for your time and curiosity.

Over the years Andreina’s daughter, Luciana Ferrari, grew up among the workers who spoiled her and exposed her to the many stimulating ideas a workshop provides. She decided to support her mother’s work and, in 1996, became the Atelier’s new owner. Needing to further expand the premises, Luciana restructured the cellar beneath the shop, with its exposed vaulted ceilings, and traces of its past use as an air-raid shelter during the Second World War still visible, to open up a further space for her Atelier. In 2016, the mezzanine facing the shop counter was converted into an attractive walk-way from which to admire a doctoral thesis from 1920, written entirely by hand by a textile expert, as well as some extreme close-up images of 6 different fabric weaves. 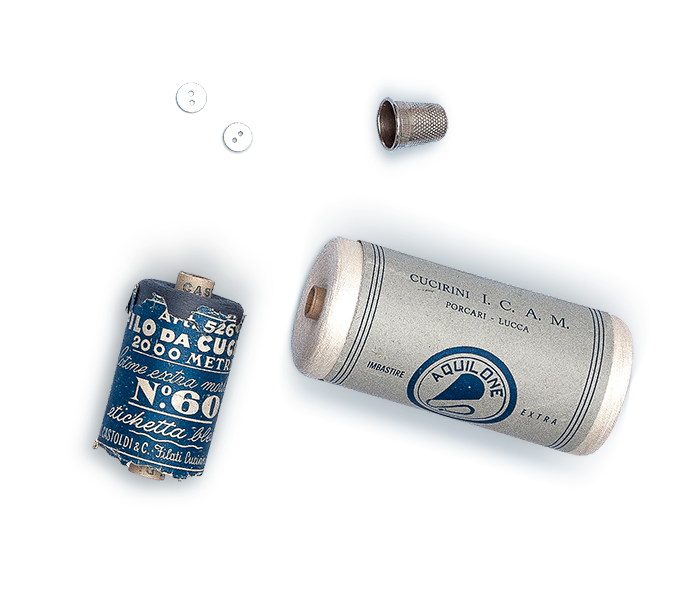